Native advertising has fundamentally shifted the way publishers and brands have distributed their content via paid ad formats, largely with in-feed ad units on Content, Social, and Product feeds.  We spoke with some members of the IAB Native Advertising/Content Committee to get their take on where native advertising is headed in 2017.  What we found was that while much is expected to stay the same, some shifts and new direction are anticipated in 2017.  There are also some continuing challenges that the industry must address to ensure that the paid distribution of content via native advertising remains a viable and sound option for publishers and brands alike. 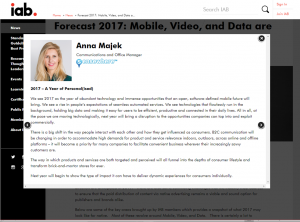