Initiatives help UK startups get a foothold in China

Initiatives help UK startups get a foothold in China

Free office space, advice and a chance to pitch proposals are among incentives.

sensewhere, a software company from Edinburgh, opened an office in China only a year ago, but already millions of people in the country are using its technology.

Taking advantage of a UK-China startup program, the company was given free space in F518 Idea Land, a tech incubator in the southern city of Shenzhen, and advice on the Chinese market. Within months, it had received investment from Tencent, the Chinese tech giant, which incorporated sensewhere’s indoor-positioning software into its mapping and instant-messaging apps. 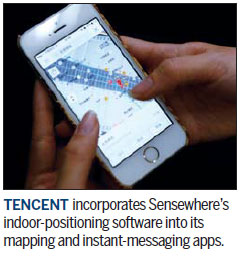 The funds allowed the Scottish company to expand quickly; it moved out of the incubator and set up offices in Shenzhen and Beijing.

sensewhere’s story shows a trend of British startups growing in China thanks to university and government initiatives, which fill the gap between China’s abundant capital and vast market and the inability of British startups to expand into China due to capital constraints.

The University of Oxford has a China-focused desk at its technology transfer subsidiary, Isis Innovation, to help cutting-edge companies from its academic laboratory find Chinese investors. Lancaster University also has a China-focused “catalyst program” to support high-tech British firms through its research and development capabilities.

In April, the London Business School organized a student-led startup pitch day, which gave graduates a chance to sell their ideas to Chinese venture capital fund managers in an environment much like the television show Dragon’s Den. Companies ranged from a maker of 3-D medical devices to a travel app developer.

A group of Scottish startups will also pitch in October in front of about 100 investors in Shenzhen and Hong Kong for the first time.

“We recognize it’s hard for Chinese investors to come to our events, so we bring our companies to China,” says Gordon Stuart at Informatics Ventures, the nonprofit organization behind the program.

In the private sector, angel investors, venture capitalists and funds run by large tech companies like Tencent are offering seed funding tailored to the smaller capacity of fledgling companies. Hence, foreign firms with a presence in China stand a better chance of finding Chinese investment.

Vicky Wu at Shenzhen Creative Investment Group, the parent company of F518 Idea Land, says introducing Chinese investors to Scottish startups is a big part of her team’s work. She adds that her team is now in discussions with other international partners to send their startups.